The mechanic and rowing world champion Bruno Saile as well as the architect Guido Terzer were mountain bikers of the first hour. With great enthusiasm, they founded the bike shop “TEMPO” at Gotthardstr.6 in Thalwil in 1990. The offer consisted of high-quality bikes and accessories, but also running shoes and fitness equipment were part of the starting range. From the very beginning, Tempo-Sport led the cult brand Cannondale, which is still an integral part of the range.

The first logo of Tempo-Sport (then still tempo)

The business was successful very quickly, the customer base was constantly growing. 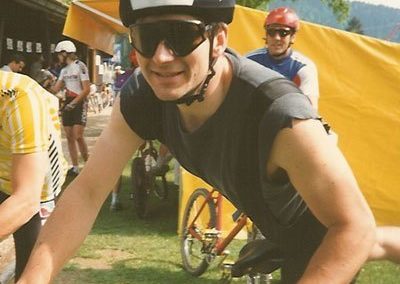 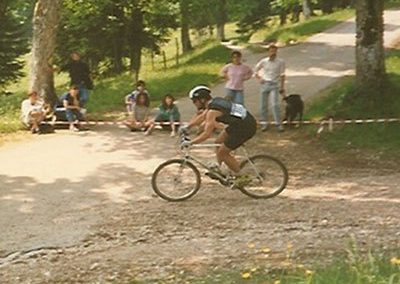 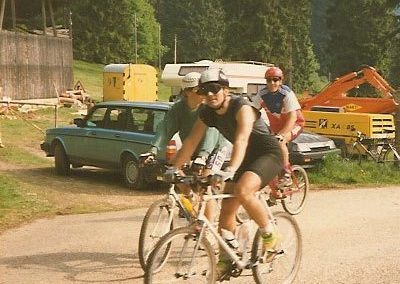 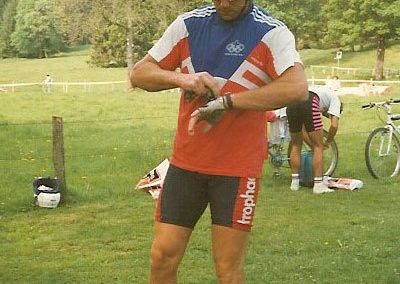 First bike race of Bruno and Guido c. 1988. Note the cool clothes. “Aerohelms” were widely used at the time.

Bruno and Guido founded a bike team that lasted about ten years and was able to take many top positions in the national mountain bike series.

One of the jerseys of the successful mountain bike team.

Early on, Guido explored the unique trails of Colorado together with the team rider and head of the bike team, René Kuster. Starting in 2000, they conducted five guided and legendary bike tours in Colorado.
Tempo-Sport developed as a business steadily, besides mountain bikes more and more racing bikes and from 1999 also triathlon velos were an important part of the range. Here, too, the clientele grew steadily.

As of December 2004, a giant step took place with the move to the much larger shop on Gotthardstrasse 12 in Thalwil. With Max Wissmann, Marcel Kamm and René Kuster, three enthusiastic sports enthusiasts joined them, who were financially but above all also with a lot of time and passion in the project “Tempo-Sport AG Gotthardstrasse 12”. At the beginning there was a bar with a small restaurant integrated. However, this was soon abandoned. The time was not yet ripe for this combination. In general, it took some time at the new location for the current range to crystallize. While at the beginning a not inconsiderable part was devoted to the outdoor sector, the range focused more and more on the current composition: Swim, Bike, Run as well as an ever-growing range of services. The motto was and still is: What we offer, we offer competently, convincedly and with a lot of commitment. We leave the rest to the others.

After a successful transfer from the old location to the new location, Guido Terzer withdrew from the business. He handed over the management to Marcel Kamm. Guido returned to his traditional profession and today successfully runs the architectural firm Entrée in Adliswil (www.entree.ch).
Bruno Saile, the second founder of Tempo-Sport, has remained true to the business to this day. He ran the workshop until his retirement and has been working part-time ever since.

Max Wissmann, Marcel Kamm and René Kuster and their team were able to shape the business strongly and continuously expand it over the past 15 years at the expanded Thalwil site. Triathlon has been an important pillar ever since. Tempo-Sport has established itself as the market leader in the triathlon sector and is one of the few shops in Switzerland to offer the entire triathlon range. But also runners, swimmers, cyclists and for some years also e-bikers will find everything your heart desires in speed sports. Countless seminars, service offerings as well as the great competence in the neoprene sector (“Neoprendoc Max Wissmann”) or in bike fitting (“Bikefitter René Kuster”) make tempo sports an actual centre of excellence. Some time ago, Carlos Cuenca joined the team as an additional know-how carrier. He is also co-owner and responsible for the running area. In addition, he leads the popular running seminars and supervises many athletes as a coach.
In the tradition of the successful mountain bike team, a triathlon and road team could be built over several years. Today, this includes around 60 athletes and is an ambassador for speed sports as well as all other team sponsors at home and abroad.

Additional location from 2016 in Erlinsbach

Another milestone was reached in 2016. With the acquisition and integration of Good Sport Erlinsbach, Tempo-Sport has a second location at Aarau. The founder of Good Sport, Fabian Scheidegger, heads it. Erlinsbach has been continuously expanded since then, especially in terms of triathlon competence. In the meantime, three employees in Erlinsbach ensure the well-being of customers. The cooperation between the two sites is very close.

2020 at the new Location Horgen with a new appearance

In January 2020, the move to Seestrasse 93 in Horgen opened another important chapter in the company’s history. For several years it had already been clear that an alternative location to Thalwil had to be sought. The property in Thalwil gave way to a large new building and the move became inevitable. Only a few kilometres away, very close to the lake and directly on the Seestrasse and within walking distance to the train station, an ideal space on about 600m2 could be found in the Seehallen Horgen. After several months of redevelopment and expansion of the old industrial halls, Tempo-Sport was able to move into the new location in January 2020. The range and range of services were taken over unchanged. The new location offers many new possibilities. In the future, all neoprenes in the nearby lake can be tested directly, a seminar room makes it possible to hold events in-house. In general, services will play an increasingly important role in the future. With the move, the appearance of Tempo-Sport was also revised. A new, fresh and concise logo was introduced in 2020.